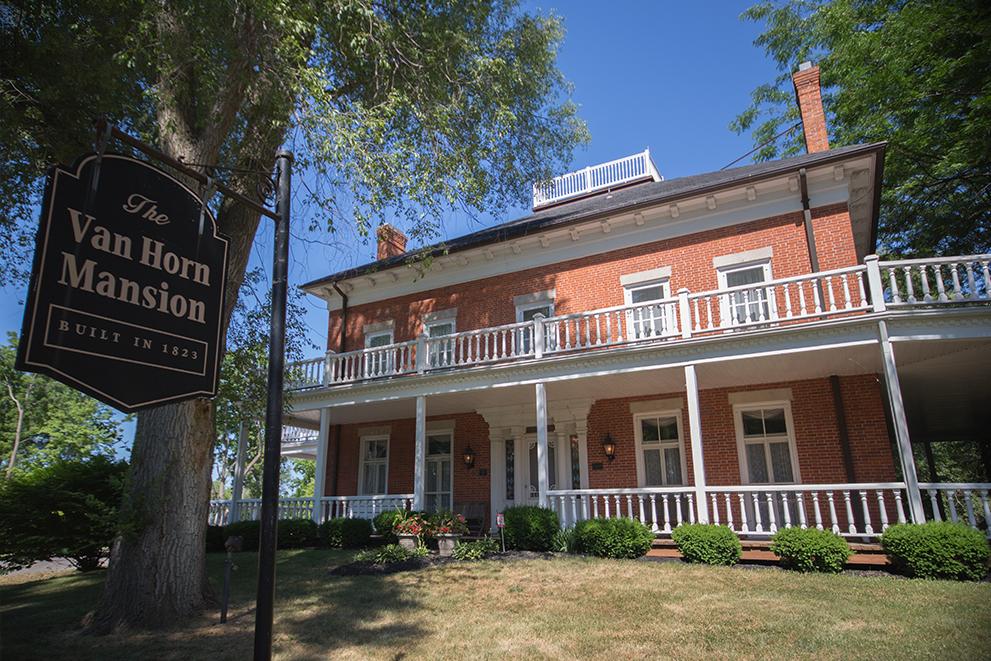 From the iconic works of Frank Lloyd Wright and Frederick Law Olmsted to lesser-known gems, explore the best architectural sites of the region.

It is justifiably tempting to only explore the natural beauty of Niagara Falls on a visit, but architecture buffs will want to set aside time for visiting the region’s top manmade sites as well. Whether your taste runs to Beaux Arts or Prairie House, there are well-preserved must-sees all over Western New York. Consider this the start of your self-guided tour.

Even the most casual of architecture fans will want to begin by exploring the legacy Frank Lloyd Wright left behind in Buffalo including The Martin House, Graycliff and the Fontana Boathouse. The Martin House is actually a complex of six interconnected buildings, designed for a wealthy Buffalo businessman at the turn of the 20th century. Considered by scholars to be a top example of Lloyd Wright’s Prairie House style, the National Historic Landmark can be fully toured with a guided group. Graycliff, which perches dramatically on a cliff, was built in the late 1920s as the summer home companion for the Martin family. The Fontana Boathouse was actually built posthumously, based on a 1905 design, and is the home of the West Side Rowing Club (it is open for tours).

After more than 40 years of neglect, the gorgeous 145-year-old Richardson Olmsted Campus is being renewed to its former glory. Designed by architect Henry Richardson and landscape designers Frederick Law Olmsted and Calvert Vaux (of Central Park fame), this Buffalo landmark is being transformed from its original purpose as the state asylum to a hospitality and multi-use venue.

While in Buffalo, wander over to Eero Saarinen’s Kleinhans Music Hall where you can experience its superlative acoustic quality along with the elegant string instrument-inspired design. The music hall is still in use if you’d prefer to see it as the setting for a live performance.

Once in Niagara Falls USA, there are plenty more gems to see. The Beaux-Arts Niagara Falls City Hall dates back to the early 1920s and features Neoclassical Revival architectural elements like fluted columns, inlaid floors and intricate carvings. Nearby, the building that is now the Niagara Arts & Cultural Center, built in 1924 by architect John Ittner, boasts a similar Revival style. It was the main high school for the area until 2000, when an adaptive reuse program saved it from demolition. It now houses over 75 artist studios along with performances, classes and community events.

For a true step back in history, visit Old Fort Niagara (which dates back to the 1600s!) and head for the lighthouse, built in 1872, on the banks of the river. If you like your history with a side of thrills, you’ll want to visit the Van Horn Mansion, which is known for its haunts. The almost 200-year old house is the first brick building in the area and has been subject to ongoing preservation over the years.

If your trip involves some younger visitors, the whole family will enjoy a visit to the Herschell Carrousel Factory Museum. At one point, the Allan Herschel factory produced the most carousels in the world — some 3,000 carousels bedecked with hand-carved wooden horses. Visit the factory-turned-museum to experience some of their most charming carousels for yourself along with galleries, a wood-carving workshop and musical exhibitions.

Make sure to check for reservations and tour times for each of the sites — opening times and group options vary from site to site, and some require a guided visit to be able to explore the interiors.