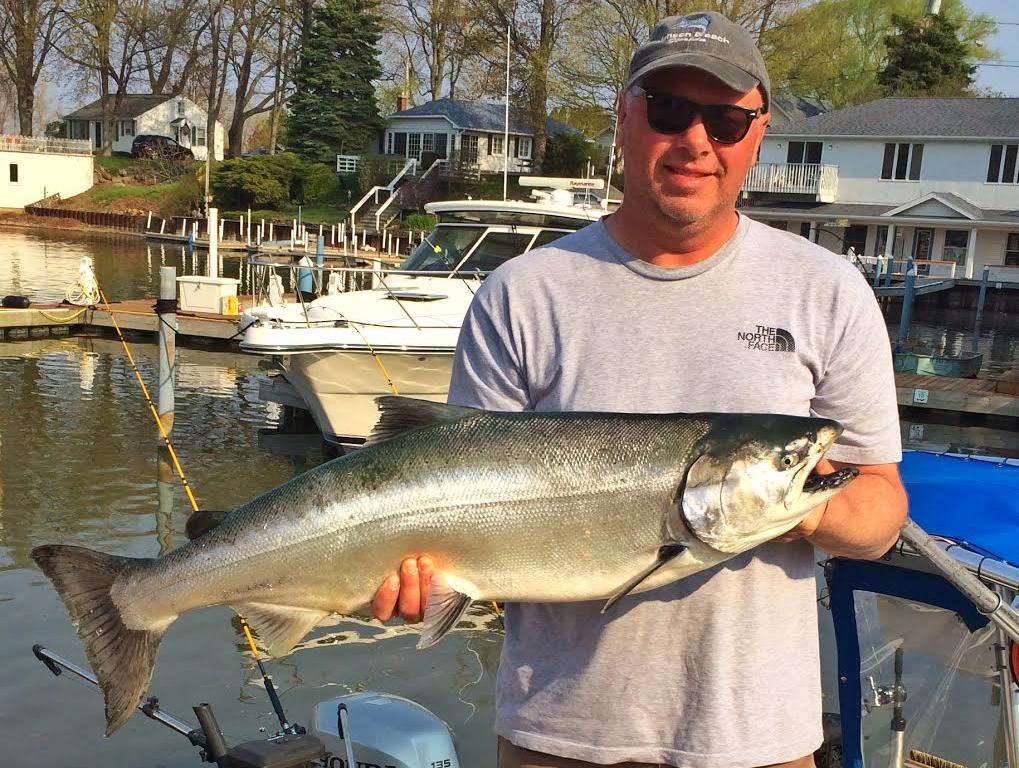 For the fishing trio of Mike Hay of Lake Luzerne, Scott Keeler of Lake Luzerne and Randy Savage of Queensbury, going to school proved to be the ticket to success as they combined to collect the $15,000 Grand Prize check in the spring Lake Ontario Counties Trout and Salmon Derby held May 1-10, 2015.

Hay was the angler reeling in the fish, a 24-lb., nine oz. salmon caught the last Saturday of the derby for some last-minute heroics. It was weighed in at Wilson after catching the fish on the Niagara Bar and Hay was the one who collected the check at the awards ceremony at Sodus Bay and it will be split three ways in the end.

"We were fishing the Niagara Bar that Saturday morning around 7:30 a.m. when the fish hit," the retired UPS worker said.

This one screamed out over 400-ft. of line like it was nothing and the fight was on. The bait of choice was a white and green dot spin doctor and a Pro-Am fly, using a diver set at 125 feet back on a No. 2 setting. They were fishing out of Keeler's 19-foot Triumph boat named "Dirty Hooker." It took Hay a half-hour to bring the fish in.

As far as credit, they pointed a finger at the Lake Ontario Trout and Salmon Association's Salmon School held during the Greater Niagara Fishing and Outdoor Expo last January. They attended the school and were so impressed with the area and the school that they decided to fish on the Niagara Bar and give it a go. The rest is history. "We love the Niagara Bar," said Hay as he accepted the cash and the trophy.

First place in the salmon division was Lee Beaton of Clifton Springs with a 24-lb. Niagara Bar king. He was fishing with Jim Skolny of Manchester and Gary Erb of Williamson out of Skolny's 22-foot Wellcraft named "Dodger," which he announced that it was for sale at the awards ceremony.

"Fishing was awesome all week for us and this is the biggest spring salmon that I've ever caught," Beaton said. "It was chaos when the fish hit and I'm glad we were able to bring the big king to the boat."

They were using a Frostbite pattern Michigan Stinger spoon on a downrigger, 55-ft. down over 70-ft. of water when the bruiser hit. It took him about 20 minutes to bring it in before they headed to the weigh station at Youngstown Harbor. Their catch earned them $2,500.

Second place in the Salmon Division and the early leader in the derby was Nicholas Glosser of Amherst while fishing with Team Thrillseeker and Capt. Vince Pierleoni of Newfane. Also on board were Stephanie Pierleoni and Tanner Niezgoda of Newfane. Fishing out of Pierleoni's 35-foot Viking "Thrillseeker 2" in the first King of the Lake Tournament of the Year out of St. Catharines, Ontario, the team ran to the U.S. side of the Niagara Bar, starting first in the shallows with stickbaits off flat lines on planer boards. They used the same program with a Live Target black and white stickbait on the drop off to take the big 23 pound, 14 oz. king -- the only fish that they caught on the surface like that over 70 ft. of water. It was still worth $1,500 in prize money. Glosser took 20 minutes to reel the fish in, helping them to place third in the tournament as well. Of the top 21 salmon in the derby, 17 were caught out of Niagara County.

The Lake Ontario Trout and Salmon Association's special $1,000 prize for the largest salmon caught by a LOTSA member went to Ken Champagne of Chillicothe, Ohio. He reeled in a 23-lb., four oz. king from the Niagara Bar to win 4th place in the Division and the LOTSA cash.

First place lake trout was Casey Prisco of Matamoras, Pennsylvania with a 24-lb., one ounce fork tail taken out in front of Wilson. The amazing thing for the "Dirty Goose" team that consisted of Emily Prisco, Kevin Keller and Justin Borowitz was that they were salmon fishing, focusing on the spring king bite.

"We hauled in over 150 salmon for the week but nothing big enough to make the board," said Prisco, who runs a 30-ft. Pursuit Offshore. "The same program produced 250 lake trout during the week including the divisional winner."

The laker was worth $1,200. It was caught on a green Dirty Goose spoon, something Prisco helped develop with Finger Lakes Tackle. The team also took an 11th place lake trout when Rob Ripka of Pulaski was on board mid-week. The spoon was an orange Dirty Goose spoon. "Fishing was great this week," said Prisco. "We put our time in. We fished 98 hours this week." It was the biggest lake trout that he's ever caught. It came off a downrigger, 60-ft. own over 140 feet of water.

Second place lake trout was a 23-lb., six out fish reeled in by Charlie Eulitt of Oak Harbor, Ohio while fishing out of Olcott. Fishing out of his 30-foot Baha "Good Time Charlie" east of Olcott, they hooked into the runner-up money winner 65-ft. down over 110-ft.of water off the Microwave Tower around 10:30 a.m.. It was the "biggest lake trout of his life." He was fishing with Chris Roff of Erie, Pennsylvania. The lucky lure was a UV Michigan Stinger magnum blue dolphin spoon, caught off the rigger.

Top youth lake trout angler was Jacob Mehegan of Wolcott with a 20-lb., 8-oz. fish caught off Oswego while fishing with his dad, Jim, and Capt. Andy Grisenthwaite of Liverpool with Broad Horizons Charters. It was the biggest lake trout ever for the 10 year old fifth grader. "I don't know how long it took me to bring it in but I remember it tired me out." Dad said it was about 20 minutes.

Big brown trout was a 16-lb., 10-oz. fish taken by Mike Wichtowski of Rochester taken near Devil's Nose near Sandy Creek. He as fishing with Jeff Coyle of Hamlin aboard his 20-ft. Crestliner named "Reel Peace."

"We were in 70 feet of water in front of Devil's Nose using a flasher-fly behind our wire diver 85-feet back on a No. 3 setting when the fish hit," Wichtowski, who won the brown trout division four years ago, said. "I thought it was a king it hit so hard."

Second and third place brown trout were connected with father and son. Arin Keegan of Sackets Harbor was fishing with Peter Priest of Watertown off Point Peninsula near Chaumont Bay when they hit a big 15-lb., six-oz. brown. They motored in to weigh their catch at Henchen Marine and pick up Arin's dad, John. That's when the father caught a 13-lb., three-oz. brown that ended up in third place. On the same trip, they also caught a 19th place walleye that Priest weighed in. The second place fish was caught on a Michigan Stinger spoon 150-ft.back behind boards over 25-ft. of water; the third place was caught on a Thunderstick using the same program. It was Arin's birthday at the awards ceremony, a nice present for the Jefferson County angler.

Big walleye for the derby was hauled in by Travis Parker of Glen Park, a 12-lb., 13-oz. fish taken near Point Peninsula near the Black River. He was fishing with Skip LaVancha of Dexter and Paul Erdner of Watertown on opening weekend out of Erdner's 18-foot Polarcraft. Placing a perch-colored Husky Jerk 130-ft. back behind the planer boards did the trick for them. It was 9 a.m. and they were over 26-ft. of water. The reason they picked this particular spot was because they had caught a big walleye there last fall and they had wished for a similar one. That wish came true, resulting in Parker's biggest walleye ever and earning a check for $1,200.

Second place walleye went to Gene Bolton of Watertown with an 11-lb., five oz. fish he took in the Henderson Harbor area on a Husky Jerk off a board. He moved into second place when the previous second place angler failed to show at the awards night.

Top youth was 13-year-old Jared Difrancesco of Baldwinsville. His 10-lb. walleye, the biggest he's ever caught in his life, placed in 16th overall. It came from Point Peninsula while fishing with his dad, Peter, Frank Spina of Solvay and Tony Chatt of West Monroe. Peter also reeled in a 10 pound, nine ounce �eye to take 9th place overall. The "secret" bait was a black and chrome Bomber stickbait for both fish. Chatt also placed 6th in the Salmon Division with a 21-lb., 14-oz. king.

For a complete leaderboard check out loc.org. Next contest up on the LOC Derby calendar is the Summer Derby set for June 13 to July 26, followed by the big Fall contest August 21 to September 7. Call 888-REEL-2-IN for more information.

Once again the Capt. Don Johannes Memorial 2015 Scholarship is being offered through the Wilson Harbor Invitational Tournament  for college students looking for a little help with furthering their education. Johannes, an avid fisherman and charter captain who served the county on the Fisheries Board and Derby Board, lost his battle with cancer in May of 2000-15 years ago. For a general overview you can go on the tournament website to see the forms and write ups, but the dates are not current. Deadline this year for submitting is June 12. To get an application, contact Capt. Mike Johannes at 716-791-3646. Scholarships will be for $500 to a promising student who shows a commitment to communicate and interpret a love of nature and an understanding of the need to practice conservation to preserve our great outdoors.

Speaking of the WHI, congratulations are in order for Matt LeClair of Plattsburgh and the Oh Baby team who won the tournament last Saturday (May 9) by catching a six fish limit to win the $25,000 check - earning a total score of 152.02 points based on 10 points per fish and a point per pound. Less than 10 points separated the top six teams for the one day contest. Second place was Yankee Troller with 151.97 points and Thrillseeker was third with 147.97 points. A total of 55 teams competed in the tourney.