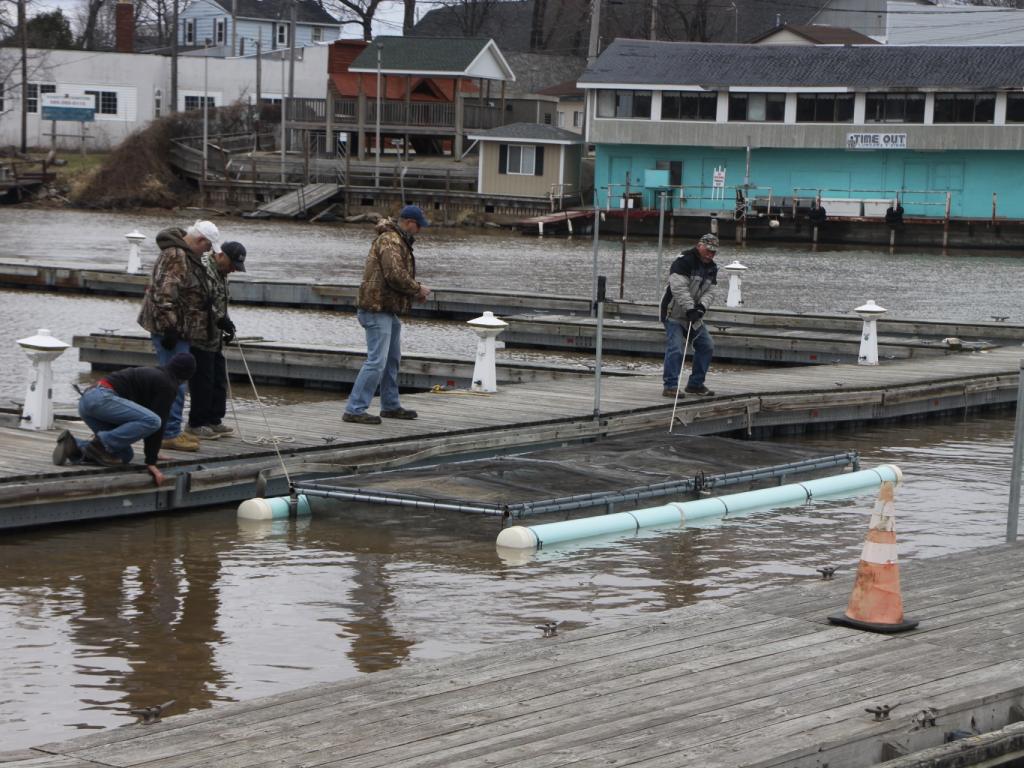 Each spring since 2005, the Lake Ontario Trout and Salmon Association (LOTSA) has been coordinating a salmon and trout pen rearing project in Olcott Harbor out of the Town of Newfane Marina.

This year, the pens were put together on April 11 and received the fish from the Department of Environmental Conservation (DEC) on April 24 - 67,200 Chinook salmon and 3,500 steelhead. This will bring the number of Chinook salmon raised to over 650,000 and steelhead to over 35,000 since its inception. The purpose of the project was initially two-fold: improve the survival rate of fish being stocked into the lake; and imprint the fish to an artificial "home" so that they return to these same waters when they mature.

"The projects turned out to be much more than that," said Bob Fishlock, chairman for the LOTSA project this year. "It created a cooperative environment between individuals, local business (especially Slippery Sinker Tackle Store), the fishing community and DEC - all working together for a common goal. It brought families together to help feed the fish and watch them grow before they were released. Other groups like science students in local schools or Boy Scout troops became involved, learning about the biology of raising fish and giving them a feeling of accomplishment. The Town of Newfane is also a big support mechanism, too."

When the salmon arrive, they are tiny - something like 120 to 150 to a pound. When they are ready to be released, they nearly double in size and they are ready to take on the world. Every day they are in the pens, they must be fed five times a day. That's one of the biggest responsibilities, and one of the reasons they need so many volunteers to complete the task at hand. Whether you enjoy fishing for salmon or steelhead on Lake Ontario or in its tributaries, much of the success you experience is directly a result of the hard work these volunteers put in every year. We hope you will consider giving something back by lending a helping hand in April of 2016.

This isn't the only pen rearing project along New York's portion of Lake Ontario. In 2014, DEC stocked over 500,000 Chinook salmon and over 60,000 steelheads through these pens at 10 different sites. For the salmon, this was 26 percent of the state's stocking, which is extremely important. Thanks to ongoing research being conducted, pen reared salmon survive two to one to direct stocked fish from the Salmon River facility. The DEC has also documented that the vast majority of the Chinook salmon caught in 18 mile creek at Burt Dam were stocked at Olcott. Once the current study is completed, we'll probably see even more salmon being reared in the pens ... giving everyone more fish to catch!

Thanks to the efforts of the Greater Niagara Fishing and Outdoor Expo, more than $4,000 was raised for the LOTSA pen project over the first two years of the Show. The Show donation each year is based upon the paid attendance on Sunday. The Expo, set to hold its third annual event Jan. 22-24, 2016, will again work with LOTSA to host the group's popular Salmon School and Lake Ontario Marketplace at the Conference and Event Center located at 101 Old Falls Street, Niagara Falls. Please consider attending and enjoying the show and indirectly contributing to the financial support for the LOTSA Pen Rearing project.