Read more about the legendary daredevils (& pets) who traveled over Niagara Falls on tightropes, in barrels & in their own contraptions.

Niagara Falls has attracted daredevils from around the world for centuries. The pure danger of the 200-foot drop and rushing water cascading at 32 feet per second, with 280 tons of force, are just a few of the reasons why many stunters have flocked to this destination to perform death-defying stunts. Throughout the years hundreds of daredevils have made history while attempting to take on this natural wonder.  Meet some of Niagara’s most famous daredevils. 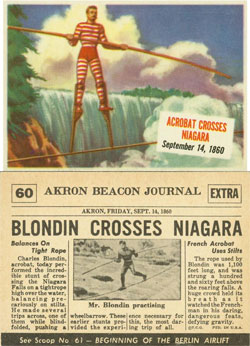 Jean François Gravelet-Blondin, a French aerialist known as the "Great Blondin," was the first of many tightrope walkers to cross Niagara Falls. On June 30, 1859 he began a famous series of tightrope walks across the Niagara gorge. Each time Blondin crossed, the stunts increasingly became more difficult and dangerous. His greatest and most difficult accomplishment was carrying his manager, Harry Colcord across the Niagara gorge on his back. 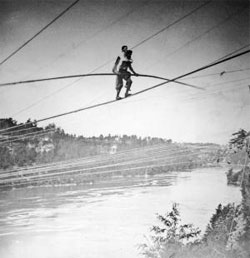 In 1876 Maria Spelterini a 23-year-old Italian woman, becomes the first and only woman to cross the Niagara gorge by tightrope. For added drama, she crossed Niagara wearing peach baskets strapped to her feet. In her series of crossings, she also crossed blind folded and with her ankles and wrists handcuffed. 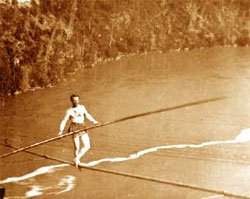 July 1896 was the last tightrope crossing for more than 115 years, completed by 21-year-old James Hardy. Hardy was the youngest person ever to tight rope walk across the Niagara River gorge. During that summer Hardy made sixteen crossings. 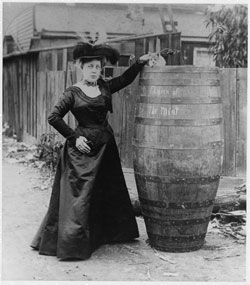 Annie Edson Taylor, 63, went over Niagara Falls in a pickle barrel on her birthday, October 24, 1901. She was not only the first woman but the first person to go over Niagara Falls in a barrel. After screwing the barrel shut, with only a cork separating her from the thundering waters, Edson Taylor traveled towards the base of the Falls. After 17 minutes, Annie was pulled from the barrel with little more than a cut on her head. 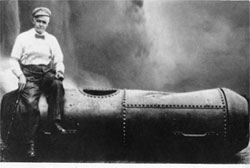 As the first male to go over the Falls in a barrel, the English Bobby Leach was the second person to tackle this death-defying stunt. On July 25, 1911, in an eight foot steel drum, Leach went over the Falls. It took 22 minutes to recover Leach and unlike Annie Edson Taylor who left with a few bumps and bruises, he had suffered two broken knee caps and a fractured jaw.

Later in his life, Leach had attempted to swim through the whirlpool rapids several times, only to be rescued by noted Niagara river-man, William “Red” Hill, Sr. Red Hill Sr. would also become well known in the area for later rescues, and a son, Red Hill Jr. would also attempt a journey over the brink. 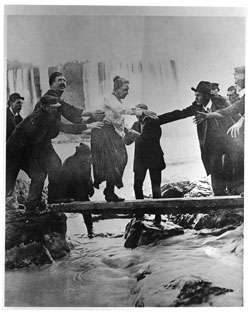 Jean Lussier was the first daredevil to go over the Falls in an inflated contraption rather than the infamous barrel used by many others. He survives the journey over the Falls in a six foot rubber ball lined with oxygen-filled tubes, and afterwards earns extra money by selling pieces of the ball's rubber tubes. 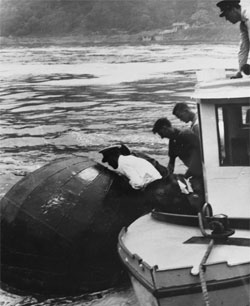 On July 5, 1930 George Stathakis, along with his pet turtle Sonny took the plunge over the mighty Niagara Falls in a barrel made of wood and steel. The massive barrel was 10 feet long and over five feet in diameter, weighing close to a ton! Although warned by Red Hill Sr. that the barrel was too big and heavy, George's mind was made and he performed the stunt despite the danger. After plunging over the Falls, the barrel would be caught behind the Falls for over 24 hours, killing Stathakis by lack of oxygen. The only things to survive the ride were the barrel and his 150-year old pet turtle. The massive barrel that Mr. Stathakis thought would protect him, actually contributed to his death. 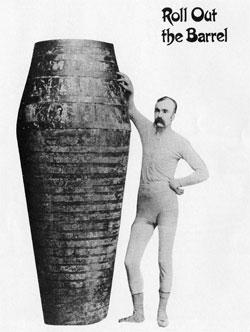 Red Hill Jr. was the son of famed Niagara river-man William "Red" Hill Sr. Hill had assisted his father in recovering bodies and rescuing survivors from the Niagara River and the Falls. It had been 21 years since the death of George Stathakis and no daredevils had attempted to challenge the mighty Falls. Hill plunged over the Falls on August 5, 1951 in "The Thing", a series of heavy inner tubes, which resurfaced in pieces without Hill. The death of Red Hill Jr. would allow Canada and New York State to conduct laws prohibiting stunting in Niagara Falls. 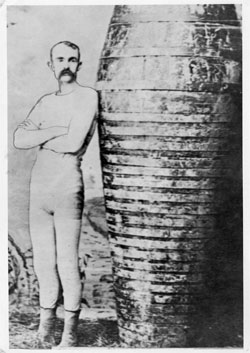 Steven Trotter is the only known person to survive the plunge over Niagara, two times. Despite the laws prohibiting stunting in Niagara Parks, on August 18, 1985 he made the trip in a barrel wrapped in inner tubes. He was arrested and fined for his daredevil acts. Ten years later, on June 18, 1995 Trotter challenged the cataracts yet again in another barrel, but this time with a partner, Lori Martin. Steven Trotter and Lori Martin became the first man and woman to make it over the Falls together in one barrel. Trotter and Martin were then arrested and fined for stunting without a permit. 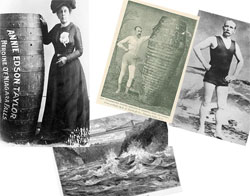 115 years after the last tightrope crossing over Niagara Falls, Nik Wallenda made history and joined the ranks of Niagara's legendary daredevils. Wallenda is seventh generation of the legendary Great Wallendas, and it was his is lifetime goal to tightrope walk across Niagara Falls. Stunting in Niagara Falls State Park has been banned for decades, however New York State and Canada allowed this one-time daredevil act to take place. On June 15, 2012, with an audience of over 13 million people, Wallenda's walk on the high wire was broadcasted all over the world. Nik Wallenda battled the heavy winds and mist and successfully crossed from Niagara Falls to Canada in 25 minutes.